AFL (Australian Football League) is the biggest event in Melbourne right now. It is a yearly event that happens on the last Saturday of September. In Australia they call it the Footy. I am so thrilled to blog about it, even though I know almost nil about the game.
The Melbournians think that everyone should know about AFL! I didn't at first, so straight off I had to choose a team, and that was a few weeks before the grand final 04. To get myself out of trouble I said whoever won the grand final would be my team. It ended up that Sydney Swans won the grand final that year and that was then. Since then, they have not won again. Apparently one shouldn't change the team, but I think I am going divorce them and adopt the team that wins this year's Grand Final.
It's hard to choose because this year's final is between St. Kilda and Geelong and I like both of them. Woo hoo, how can I choose! So guys, play hard and win the game so I can choose you.

Photo of the cup in yesterday's parade in Melbourne between the Geelong and St. Kilda players. Sorry guys I don't know your name, but promised that once I adopt either one of your teams I will get to know you better. 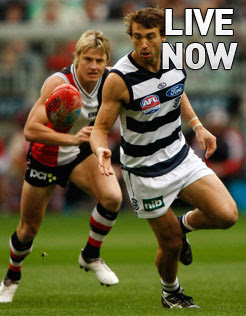 The game started at 2:30 PM today. This is a live picture from the AFL Official Website.
The blue and white is Geelong and the black, white and red is St. Kilda. 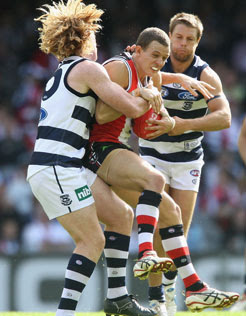 Hey hey cool it, two against one is not nice. Where are the rest of them. 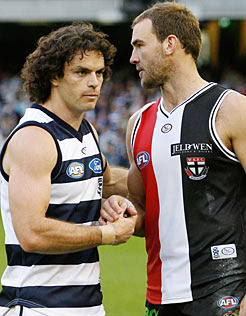 I think they are shaking hands! Such great photos, I have borrow them from the AFL official website. I am so excited to be able to blog about the AFL Grand Final. I have adopted Melbourne as our city, and it is good to know what the locals are up too. I dedicate this post to all blogger husbands out there who are interested in the Footy. If you want to know the result you can check out the above links. Enjoy the game and I will get back to some quilting soon.

This post made me giggle. Michael loves American Football but only roots for his college team of Virginia Tech. I too know nothing about the game but when we had television I would let him have the entire day to watch and would try to look interested/amused at the correct parts. I'm not sure I did so well. I often clapped, roared, and laughed aloud at inappropriate moments. I would then excuse myself to get more chips. :)

Nice photos....i'm not into football but kinda wish I was...it's so exciting..but I don't even know and understand the rules.....bad girl.

I'm also not into football, but I enjoyed the pics.
Micki

Queen Of The Armchair aka Dzintra Stitcheries said...

Hey Nat...I don't follow footy but I know it is huge...even our table at Stitching on the Bay was talking about it...Enjoy and I look forward to see who you choose...Dzintra♥x

Just an up date on the game. Geelong won by
a small margins in the last few mins. It looks
Geelong is my team!!! Thanks for all your
comments. I had fun blogging this post - Hugs to all
Nat