Hi there, it has been a long time since my last blog post! My friends near and far have been asking me to start blogging again. Even though I'm posting daily on Instagram, I was told there is not enough detail in IG, sorry! Of course I have no excuse now that I'm retired! But you know, there are other priorities in life when you are retired. My first priority these days is exercise, and that's what I do most days.

A lot has happened since my last blog post about my exhibition. As soon as I returned from the exhibition in Victoria, my husband and I left for our six weeks holiday in Central Asia, Scotland, Europe and Scandinavia. We had a fabulous trip, and some of the places we visited for the first time. We are glad now we took that trip because as you know, now we can't even plan a trip anywhere.

Soon after our return, our beach house 'Seabird' is finally completed. There was so much to do before we could move in. We planned to build our own kitchen and cabinets using IKEA modules. But it didn't happen straightaway due to Australia's bushfires. The areas close to Seabird were badly affected by the fires. Even though our place is safe, a month was lost because of it. Soon after we finished installing the kitchen and cabinets, we were on lock-down due to the Corona virus. The rest is as you all know. We are still under restrictions, but much better than the last two months.

Last weekend we travelled four hundred kilometres to visit a dear friend we haven't seen for a while. At my friend's house I spotted a quilt I haven't seen before, but know it so well! It was a quilt that she made using fabric we exchanged some years ago. She explained the story of this quilt on the quilt's label in the last photo below.


Two different quilts from the same pile of fabrics. As soon as I saw my friend's quilt I felt like I knew it because both quilts share the same fabrics. My quilt took me years to finish so I was familiar with the fabric.  Read the label if you want to know the whole story of these quilts.

Until next time (hope it won't be too long)
Nat

My Natural Impressions Exhibition started on the 7th September 2019 at Toora Village Studio Gallery in Toora, South Gippsland. The exhibition was officially opened by my talented daughter  Kitiya Palaskas.

We drove to Toora on Thursday after stopping in Melbourne for last minute business for both the exhibition and our upcoming trip next week. We had a good night's sleep at our beautiful accommodation "Far View" in Venus Bay. Venus Bay is quite a drive away from Toora, but the beautiful drive through the rolling green country was worth the trip.

Setting up was Friday. I was apprehensive with the set-up and hanging all the works. I only saw the gallery once a few years back. With the expert help from the gallery member Sue Gilford the hanging went without a hitch. We got everything hung by Friday evening and before it started to rain. I turned up early next Saturday 7th for last minute arrangements. Toora Gallery members were very friendly and helpful throughout the setting up and the opening event.

The exhibition will be on until October 27th. Please call in if you are in the area. My work is done for now, but I was invited to exhibit at Yarram Courthouse Gallery in March 2020 and I accepted!

I totally enjoyed the whole process of preparing for this exhibition. It pushed me to get up and try things that I haven't done before. All those dreams of doing nothing after retirement, it's really not for me!

I'm sorry if I have been off blogging for so long. I know some of you told me that seeing my posts on Instagram is not the same as reading my blog, but I have to admit it's a lot faster posting on Instagram :)

Until next time
Nat

Before I retired and moved I was invited to exhibit at the Toora Village Studio Gallery in South Gippsland, VIC. I accepted the invitation because I didn't want to have nothing to do! Haha, that was very wrong of me! I also knew that I would have more than a year to prepare. As from today I have less than 3 months before the exhibition opening on 7th September 2019.

The first 6 months after we arrived at our new home we spent most of that time to settle and to buy furniture and other items that we needed. I also joined a local health club, quilting guild, basket weaving group and lawn bowling club. Helping out with our grandchildren is also a regular task on a daily basis. I'm glad to report that we are well settled and very happy in our new home and new city.

I told myself that as soon as New Year arrived I would start preparations for the exhibition. I didn't actually get to start until February 2019 however. I had rough ideas of what I was going to do, and that was a start, at least. 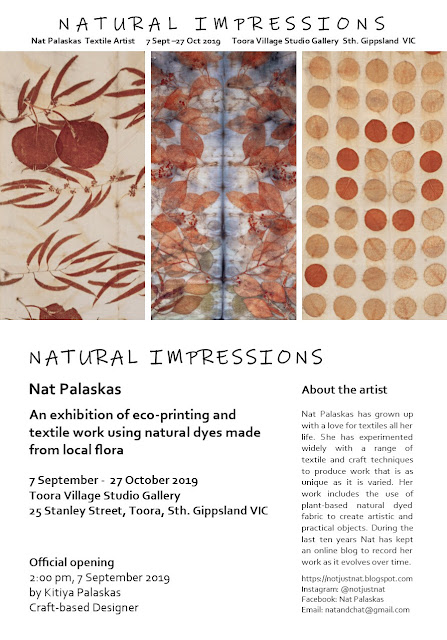 I'm delighted to invite you to my exhibition 'Natural Impressions'. The details are on the invitation brochure above.  My daughter Kitiya Palaskas will officially open the exhibition on the 7th September at 2:00pm. If you can't make it to the opening, the exhibition is going to be on for 2 months.

Looking forward to seeing some of you at my exhibition.

Life after the Big moved

We moved exactly a week after I retired at the end of May. It was a big move at this stage of our lives, but we have moved many times since we married. Most of those moves were in different countries!

Anyway, it has been over 4 months since we moved to Canberra. We arrived in the middle of Canberra's winter which was very cold and some nights the temperature was below zero and icy in the mornings. Luckily the house is warm and comfortable.

We bought some new furniture, but most of the furniture we already had. Some of it is our treasured furniture we brought back from the Middle East. It's important to be surrounded with familiar things. Apart from setting up our new home, I joined the gym, the ACT Basketry and the Canberra Quilters.

We have visited some local music events, galleries and drove down to the South Coast a couple of times as well.

I'm keeping up the online workshops with India Flint. I'm trying to get back to finishing many quilt projects I have started over the years. Already I've started a couple of new projects too!

It is now late Spring in Canberra. We went through lovely Spring blooms right here on our street and throughout Canberra. Yes, we are settled in well here in our new home and city. We get to help with our grandchildren on a daily basis and some weekends too.


We have also started building on a block of land we bought 7 years ago on the South Coast of NSW. It could not have happened at a better time. We are now only 2 hours drive from Canberra. We won't get much done before Christmas though. Patience is the name of the game.

I have many more photos to share with you on the next post. So don't give up on me!

Until next time
Nat

This post winds back by 3 months. I had drafted this post just before we moved, but as anyone who has been moving knows, moving is crazy. So below is what I was telling you at that time, but didn't get around to posting it....

I have had the urge to blog and to say that today the last Friday of my working life! Three months ago I handed in my retirement notice. Actually, I only needed to give one month's notice, but I gave them  them plenty of time to find my replacement. They have found me a replacement, but not just one. They have found seven others to replace me! It is good to know that I have put in more than a hard yard into the job. It's one of the best jobs I have had in my career. I will miss this place and the people I have been working with for the last 14 years.

Apart from today being a significant Friday for my working life, I have few things that I made recently to share with you. I spent the Easter holiday with DS and his family. While I was there DDIL asked for my help making up 2 quilts using work from her students from year 7 and year 8. The work consists of Sashiko stitched panels. I set the blocks using thin white sashings with blue and red corners and the opposite colour for the borders of each quilt.

I knew that I only have less than 3 months before our big move, but still have to work within that 3 months. The idea didn't stop me from signing up for an online workshop "Alchemist's apron" with India Flint. This was India Flint's first online workshop. I'm glad I signed up because I really enjoyed it and learned a lot from India and the class mates in the class Facebook group.


Some natural dye experiments using plants and flowers from the garden of the rental house. It was part of online workshop with India Flint I was taking in May.


By the time you read this we would have moved. I will be updating you with our news soon. I do hope to keep blogging more regularly now that I am retired.

Until next time
Nat
16 comments: