Last Sunday we went to the tennis "HIT FOR HAITI" charity event organized by Roger Federer to raise money to help victims of the Haiti Earthquake. As part of the Australian Open the players were ready for the game the next day, but with Roger Federer's help they got together and put on this event. It was announced at short notice, and the arena was filled to capacity. Over $200,000 was raised at this event. Below are some photos I took to share with you. Click play to see all the photos.
We enjoyed the game very much. The players were light hearted, laughing and joking which you don't see when they are playing normally. After the game we walked to the city along the Yarra River to Federation Square for a cup of coffee. 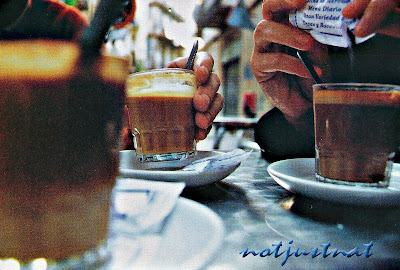 I picked up the above postcard when we were in Barcelona in 2008. I love latte in Barcelona and this picture always reminds me of the many cups of latte I had there.

Queen Of The Armchair aka Dzintra Stitcheries said...

Good work Hit For Haiti!!!
And Nat we will have to have a latte next time we meet...Dzintra♥x

I haven't been by for a little while - really enjoyed your Post, thanks and just love the fresh overall look!
Hugs - Lurline♥

Love the pictures from the Open.....how lucky you were to be there!
Our TV announced 400K for the finally tally on the monies raised. I am a huge tennis fan are you?

My husband is visiting Perth then will head to Sidney and head back to the stateds on Australia day.....then have a week in Calif. before heading home to the cold Northeast again. The 109 temps are killing him!

What a fun event for such a worthy cause. I think you must have had great seats judging from the photos.

It is really great to hear what other countries are doing to help Haiti. Just shows that we are one people.

Great slide show. Sounds like you and Tom had a good day for a good cause.

I feel a attack of the hearts coming on. Particulary with Valentines's day approaching.
What are the demensions for the hearts? They look longer than wider.

It's great to see the kindness that has been going around. Hugs from a fellow coffee drinker! :)

Really enjoyed your "smile" box of pictures and what a great fund raising event! We can never do enough for the people of Haiti! I'll think of your generosity when I enjoy my latte today! Have a good day!

G'morn, Nat ~ THANK YOU on behalf of our Haitian in-law's & all native to Haiti. This may well be the stepping stone of recovery from 3 horribly corrupt political government reigns, to bring this country back from the near depths of horror.

TY for your sweet notes, I am doing much better daily now.

Have a beautiful day ~
Hugs, Marydon

Such a worthwhile cause and how wonderful that you could be a part of it. They need a strong government to rebuild their infrastructure, don't they?

Your slideshow was great! I especially liked 19 and 20.

Such a worthwhile cause and what a lovely day you had.
Micki